Despite of the fact, that my Nokia E61 has virtually more bugs than features it’s always nice to see how innovative Nokia can be… Formerly it was not possible by consumers to update their phone’s firmware on themselves – they were always requested to go to the next shop and let the technician perform the update – often without any backup of existing data, like contacts and messages. 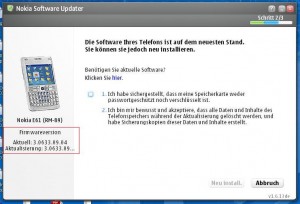 Now, no one shall say that Nokia is not learning from their customers, since a couple of months Nokia offers a shiny tool assisting PC users to update the phone’s firmware via cable connection to a PC (don’t know if Mac is supported, the tool is available at least for Windows PCs). The Nokia Software Updater can be downloaded free of charge from the Nokia homepage. It automatically checks against a database if updated firmware versions are available. An online internet connection is required unless you did not download the firmware yet.

So I gave it a chance and instantly hoped, that Nokia is servicing three year old „business“ mobile phones. I was quite a bit surprised using the tool for two completely different reasons: